Model building by Watson and Crick famously led to them being the first to that discover the structure of DNA was in fact in the form of a double helix. It was the orientation and the manipulation of the central spine of base-pairs that proved essential to solving the structure. However, this approach to solving the structure of DNA was not unique. Model building was in vogue in the world of biophysics, thanks to the pioneering work of Linus Pauling on helical proteins. Previous DNA models had been already attempted by William Astbury and Sven Furberg but they were not based on the more accurate experimental results of the King's Biophysics department and were therefore inaccurate as they were calculated to comprise of only one chain. The first attempted model to use the experimental results of the King's biophysics department was built in late 1951 by Robert 'Bruce' Fraser. Fraser was at the time a research student in William Price's spectroscopy group, and had been asked by Maurice Wilkins to try his hand in building a DNA model.

Maurice Wilkins recalls in his autobiography being beckoned by Fraser to view his helical model of DNA:


"Bruce had done a good job: the model was very interesting. The three helical chains had the right pitch, diameter and angle, and were linked together by hydrogen bonds between the flat bases which were stacked on each other in the middle of the model".

The model illustrated well the general understanding of DNA in the lab: the structure was helical based on the work of Wilkins and Alex Stokes; the phosphates were on the outside as indicated by Rosalind Franklin; the stacked central core of bases, or "pile of pennies" as shown by the x-ray diffraction photographs first achieved by William Astbury. However, whilst the model showed many of the correct characteristics in retrospect, it also reflected certain errors current at the time. A three chain structure was based on the water content and density data for DNA.Whilst both Wilkins and Franklin could not envisage anything less than three with that information (and had both separately told Fraser that the model had to be three chained) the Fraser model contradicted the X-ray diffraction data by showing the three chains to be equally spaced. The hydrogen bonding between the bases was also incorrect and the structure did not fit with Chargaff's 1:1 base ratios. The end result of the model was one of collective frustration as it summed up how the King's group had become trapped in the belief of a three chain structure and with no guidance as to how to construct it.

The model was never published, Bruce and Mary Fraser left the lab shortly afterwards and moved to Australia in 1952. There was a final act of drama as Maurice Wilkins urgently cabled Fraser in 1953 asking him to write up his model asap for publication in Nature.


Fraser worked throughout the night to finish his note on the model, but Maurice Wilkins decided in the end not to submit it for publication alongside the other papers for Nature in March 1953 as it compared unfavourably with the Watson-Crick model. Maurice Wilkins later regretted his decision as the Fraser model showed for the historical record how advanced the thinking was at King's. Below are copies of the original note: 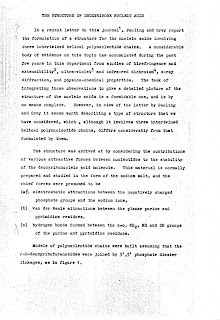 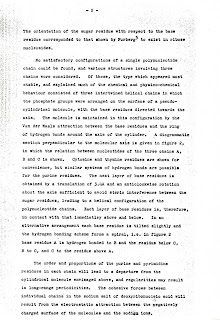 To read more about Bruce Fraser and his DNA model there is an excellent interview with him on the Australian Academy of Science website: http://www.science.org.au/scientists/interviews/f/bf.html

An earlier and more comprehensive blog on Bruce Fraser and his model is also available on the Linus Pauling blog: http://paulingblog.wordpress.com/2009/04/16/the-fraser-structure-of-dna/