The Nobel Prize winning biophysicist is chiefly known for his experimental work that led to Watson and Crick discovering the correct double helical structure of DNA. The importance of Wilkins, and that of the King’s biophysics department in the discovery of DNA has been somewhat overshadowed by the dynamic duo from Cambridge ( even to the extent that the publisher of Wilkins’s autobiography thought to mention in choosing the title, “The Third Man of the Double Helix”). This is a disservice to both pioneering DNA work at King’s which paved the way for its discovery and which as an institute spent the next decade after the discovery confirming the validity of the Watson-Crick model.

His early life and education:

Maurice was born in Pongaroa, New Zealand in December 1916 where he lived happily until the age of six before his father, a medical practitioner, moved his family to England in 1923. Whilst living in Birmingham, Wilkins began to display his characteristic ingenuity and craftsmanship as he built his own telescopes and microscopes to pursue his interests in astronomy and optics. He won a scholarship to St John’s College, Cambridge in 1935 to study physics but due to both his eclectic tastes in physics and his preoccupation with university politics he obtained a low second degree in 1938. Although disappointed by the result, Wilkins’s eclecticism and good fortune allowed him to join his former tutor, Mark Oliphant, at Birmingham. Oliphant had been impressed by Wilkins’s ability and interest in thermoluminescence and phosphorescence and set him up as the research student for a certain, John Randall- whom Wilkins would enjoy a fruitful, if not fractious thirty year collaboration. Wilkins made rapid progress in Birmingham obtaining his PhD in luminescence in 1940.
He was subsequently recruited into the Ministry of Home Security and Aircraft Production to work on the improvement of radar screens. In 1944, Wilkins followed Oliphant to the University of California at Berkeley, to work on the Manhattan project. Although Maurice played a small role within the project he became increasingly concerned about the ethical implications of atomic weapons and like many of his colleagues turned away from atomic physics to pursue biophysics inspired to some extent by Erwin Schrodinger's book, What is Life? (1944). 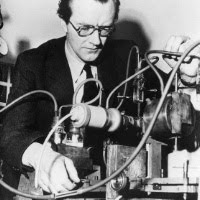 After returning from California after the war, Maurice decided to rejoin Randall’s research group at first at St Andrew’s University in 1945. This group then moved in 1946 to King’s College, London where Randall was appointed the Wheatstone professor of physics and had obtained funding from both the Medical Research Council (MRC) and the Rockefeller institute for a new Biophysics Research Unit. This new MRC unit was fairly unprecedented with interdisciplinary work within science not being a common occurrence. Maurice was integral in the early years of the institution with innovative work in adapting microscopes to use optical, ultraviolet and infra-red light. He turned to studying DNA, on Randall’s bequest in 1950. Working closely with the PhD student, Raymond Gosling and the mathematician, Alec Stokes they started to produce the first crystalline diffraction patterns for DNA. This formative period convinced Wilkins that DNA had a clear crystalline symmetry and could be readily pursued. It was whilst at a conference in Naples in 1951, that Wilkins showed a slide of their results that excitedly transfixed a previously bored and distracted Jim Watson as he realised that the structure of DNA was possible to study. 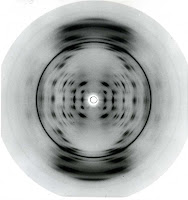 Later that year, Wilkins was joined by Rosalind Franklin to work on X-ray diffraction experiments on DNA. The need for a professional crystallographer was essential for progress on the structure but due to misunderstanding over each others role the two fell out splitting the laboratory where Franklin and Gosling would continue working on the X ray diffraction of the A Crystalline Signer DNA whilst Wilkins and Alec Stokes (and later Herbert Wilson too) would work on the “B” form though without access to the Signer which was a remarkably pure form of extracted calf thymus DNA. Franklin and Gosling produced enhanced the quality of the X-ray diffraction photos thanks largely to Franklin’s expertise in crystallography with the vital “photo 51” being taken in May 1952 as a consequence. The teams effectively worked in isolation and it was not until 1953 when Franklin had left for Birkbeck College that any unified King’s response occurred. By then it was too late. Watson and Crick cracked the structure of DNA in March 1953. Somewhat unfortunately,the spur for Jim Watson's new attempt at model building had been seeing the marvellously clear helical pattern of "photo 51" and deciding to discard experimental data pointing to three chains and opt for two. 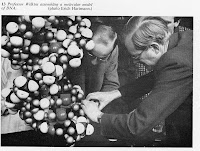 Yet, to Maurice’s credit rather than throw in the towel he and the department of King’s continued to work on DNA. The process of checking the validity of the model was required especially with the constant bombardment of competing models appearing during the fifties and sixties. The work was painstaking and the refinement of the Watson - Crick Model took seven years. The toil was however worth it with the Albert Lasker Award being given to Maurice, Watson and Crick in 1960 and a general indication that a Nobel Prize would be soon on the cards.

Whilst the DNA aspect of this project is self evident, the ‘social responsibility’ requires explanation. This phrase embodies Maurice’s dual pursuit of a scientific profession but with a social consciousness. This distinct direction was present from his Cambridge student days where his anti-war activities led to him investigating the effect of incendiary bombs (the devastation that they ensured had only just been witnessed during the Spanish Civil War). Despite, and in some ways because of his work on the Manhattan project, Maurice became an ardent opponent of the proliferation of nuclear weapons and a member of organisations such as CND and Pugwash. In 1968, his opposition to biological and chemical weapons led him into contact with Hilary and Stephen Rose and together they set up the British Society for Social Responsibility in Science with Maurice serving as President. The initial aims of the society were to challenge the belief that science was a ‘pure knowledge’ that only caused harm through its application and therefore ridding the scientist any mental anguish on the ethical implications of this research. This reductionist approach to science was abhorrent to Maurice who believed the practice of science to be embedded with human values and should therefore be made to be held accountable for its impact on society. His passionate belief that the broader implications of science should be taught led to the creation of the “Social impact of the biosciences” which is run to this day in the Biophysics department here at King’s.