On the 13th September 2010 Principal Professor Rick Trainor unveiled the newly designed DNA frieze outside the Franklin-Wilkins building on the Waterloo Campus. The new permanent window display was sponsored by Ecovert FM to mark the 10th anniversary of the Public Private Partnership (PPP) contract with King's.  The set of friezes depict the two scientists and the key developments associated with them that led to the solving of the structure of DNA. To celebrate the unveiling members of the Franklin and Wilkins family joined the Principal and the CEO of Ecovert Group Bruno Bodin for this special occasion.

The set of friezes on street level on Stamford Street give an excellent introduction to the DNA work undertaken at King's: for the representation of Rosalind Franklin it praises the X-ray diffraction studies that she and Ray Gosling took and couples her with her most famous creation, 'Photo 51'. It's visually arresting for the casual pedestrian or distracted student but the real treat is the detail on the friezes: the extracts and images of Franklin's notebook and a brief diagrammatic explanation of the significance of 'Photo 51'.

Maurice Wilkins the frieze acknowledges both the work that he achieved in the early fifties and the later work verifying the Watson-Crick model. Again the frieze is a fine tribute pointing out the early X-ray diffraction work and early helical interpretations harbored by Maurice Wilkins and his collaborator Alec Stokes. 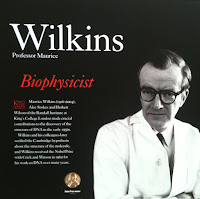 Alongside these panels on the story of DNA is the impressive representation of the scale and enormity of DNA through a linear outline of a section of a double helix coiled around the three revolving doors of the entrance of the Franklin-Wilkins building. The creator of the artwork, Ian Chilvers of Atelier Works, aided by Dr Roland Roberts of the Department of Medical & Molecular Genetics here at King's College, scaled up a section of DNA from the smallest human chromosome (21) by a factor of 1.1. billion and applied the design to the doors used a frosted linear vinyl. The artwork gives a visual demonstration of the complexity of our genetic make-up: In order to depict the total size of this chromosome at this scale it would involve having to stack 10 million of these doors on top of each other- making it a staggering 20,000 km high!
The project is part of a larger renovation scheme by KCL and its facilities management partner Ecovert FM to reduce the ecological impact of all campus buildings. The Franklin-Wilkins building can now harvest rainwater for cleaning and toilets, reduce energy waste through energy efficient lighting and heating systems and even convert waste into biomass. This larger project would have pleased Maurice Wilkins who was a keen advocate of alternative energy use and would appreciate that a building that shares his name was pursuing an innovative and environmentally responsible policy towards energy consumption.
Posted by Chris on October 15, 2010
Email ThisBlogThis!Share to TwitterShare to FacebookShare to Pinterest
Labels: DNA, Double Helix, King's College London, Maurice Wilkins, Rosalind Franklin, X-ray diffraction