In this post, there will be a brief overview of the research carried out here at King's on the structure of DNA. This of course is not a definitive history of the events and interactions which led to the discovery of a double helix. For a more comprehensive scientific history of DNA, I would recommend Robert Olby's book "The Path to the Double Helix: The Discovery of DNA" (1974). My purpose is to introduce some of the techniques and findings that occurred here at King's and relate it to the overall contribution to identifying the structure of DNA.


The new Biophysics Laboratory created by J T Randall at King's College London was a lively and unconventional institution. Randall's ambition to create a laboratory where physicists could work on biological problems and vice versa were being realised at King's and an assortment of young research workers from diverse scientific backgrounds found their feet in these new disciplines. Maurice Wilkins was one of these workers. His first years at King's had proved fruitless in the field of ultrasonics causing mutations in fruit flies and he swiftly moved on to construct, with his colleagues Bill Seeds and K P Norris reflecting achromatic microscopes which he began to use on ultraviolet and dichroism studies on the Tobacco Mosaic Virus (TMV), nucleic acids and nucleoproteins. During these initial experiments with DNA Wilkins found a significant finding he wrote in 1962:


"While examining oriented films of DNA prepared for ultraviolet dichroism studies, I saw in the polarizing microscope extremely uniform fibres getting clear extinction between crossed nicols...each time that I touched the gel with a glass rod and removed the rod, a thin and almost invisible fibre of DNA was drawn out like a filament of spider's web. The perfection and uniformity of the fibres suggested that the molecules in them were regularly arranged"


The excellent quality of this extracted DNA was not through chance. The sample was supplied by Rudolph Signer, a Swiss biochemist who had been since the 1930s endeavouring to produce high quality extracted DNA. The sample made in 1949 with his student H Schwander made that grade. On the 12 May 1950, Signer was invited to the Faraday Society in Cambridge to discuss his work on preparing DNA samples. At the end of the talk he distributed bottles of his best DNA and Maurice Wilkins was one of the lucky recipients. Wilkins later reflected that this was "a generous act in the best tradition of science!".

Having witnessed the remarkable uniformity of the fibres, Wilkins took the DNA fibres to Raymond Gosling for X-ray diffraction. Gosling was the only person using X-ray diffraction techniques at the time to complement Randall's interest in the X-ray study of ram's sperm heads. Initially the two were unsuccessful  the specimen to the film distance too large and the X-ray tube too weak to yield a pattern but they improvised as Raymond Gosling explains:


"I wound these fibres around a wire frame, forming a dense bundle which on the conventional Raymax tube produced a diffraction pattern recordable in a few hours. If that sounds rather scientific, I must tell you that the 'wire frame' was simply a bent paper clip and the 'dense bundle' was formed by applying Lepages quick setting cement, purchased from Woolworth's in the Strand!"


The above photograph is the one that Maurice Wilkins showed at the Naples conference that so captivated Jim Watson. This was obtained thanks to a suggestion by Randall , by passing hydrogen thought the camera and sealing it where possible to prevent air scattering, which caused a fog on the film. From these images it was possible to demonstrate that the molecule was packed together like cylinders 2.0 nm in diameter and  that the structure was very crystalline. The final study in this initial period was experimenting with the water content of the molecule. By drying and heating the specimen they obtained an amorphous scatter pattern .This contrasted when they repeated the process but wetted the hydrogen at 90% humidity for 12 hours prior to exposure and obtained a crystalline pattern similar tp the example above. This demonstrated that water played a vital role in maintaining an ordered crystalline structure.


In June 1950, the old wartime Siemens X-ray tube broke down leaving the department without a working X-ray diffraction camera. They soon obtained designs for new fine-focus X-ray equipment produced by Ehrenberg and Spear at Birkbeck College. Whilst the camera was being constructed Randall came to the decision that they needed a professional crystallographer to keep the work progressing. Rosalind Franklin was already on her way to the department as a research fellow to work on proteins but Randall expressed in a letter the change in orientation. The letter stated that "as far as the experimental X-ray effort is concerned there will be at the moment only yourself and Gosling..." and  gave no indication of Wilkins' continued involvement on the project. This may account for the grievance that Franklin held from what she viewed as Wilkins interpreting her problem but this issue is in no way definitive and has been heatedly debated along with the wider recognition of Franklin's role ever since. Yet, it is best to leave the issue of Franklin and Wilkins relationship to one side for a moment and recount for what was actually achieved when she joined the department.

One of the first achievements of this collaborations was a vital one in solving the structure of DNA. Franklin brought her expertise to the job by fixing the humidity and the water content of the exposures by passing the hydrogen through saturated aqueous solutions of appropriate compounds through which the hydrogen could bubble into the camera at any given temperature. They soon found that the sodium salt of DNA supplied by Signer could transform into two forms, Structure A and Structure B. 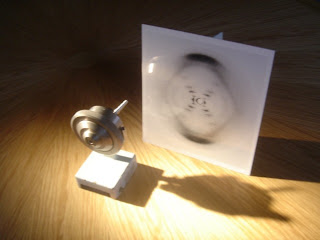 Soon after this discovery, the division between the DNA workers at King's was cemented with Franklin and Gosling continuing to work with the fine focus X-ray tube using Signer DNA to outline the Structure A pattern of DNA whilst Wilkins and Alex Stokes used the old Raymax camera and work on the Structure B pattern using Erwin Chargaff's DNA samples. This situation did not change until Franklin left King's College London in February 1953 with virtually no communication between the two groups.

In October 1951 Wilkins, who had been reading Linus Pauling's famous paper on the protein alpha-helix , wondered why Pauling had not calculated the X-ray diffraction of the structure. After discussing the matter with Stokes he came back the next day with a Bessel function calculation of diffraction of a helix. The remarkable aspect of the 'Waves at Bessel on Sea' diagram was how much it corresponded to the new B diffraction patterns that Franklin was achieving. Franklin reacted furiously to her results being interpreted and the matter was set aside. 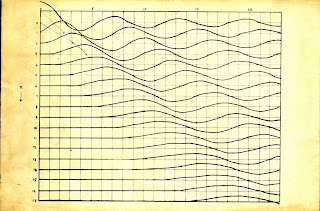 The following month November 1951, saw the unveiling of two DNA models: one by Bruce Fraser at King's and the other by Jim Watson and Francis Crick in Cambridge. Both these models were three chained helixes and lacked the key base-pair element. Fraser's model (as described in a previous post) was a closer approximation of the correct version as a fundamental flaw in the first Cambridge model was that the helix was inside out with the bases on the outside due to Watson misjudging the water content. The failure of the Cambridge model put a temporary injunction on the pairs DNA interest, whilst model building was not pursued at King's College London after Fraser left the department shortly after this.

At the start of 1952, Franklin, taking the advice of a Paris mentor, Vittorio Luzzati , decided to elucidate the structure of the A pattern using the crystallographic method of cylindrical Patterson function. This laborious method was a way of calculating the Fourier transform of the intensities of the spots on the X-ray films ,and involved measuring different reflexions of the specimen which required a new tilting microcamera to be designed for this process. In order to calculate the Fourier transform, Franklin and Gosling had to consult Beavers and Lipson strips (pictured below). Ray Gosling recalled that:

"These assembled the values of the periodic functions all set out at appropriate intervals and arranged sequentially in a handsomely polished mahogany box. I used to have nightmares...that I had dropped a box of 'strips' on the floor and had to sort them all out in the correct order!"

By the end of 1952, Franklin and Gosling had the preliminary results back for the cylindrical Patterson function of Structure A. Although in hindsight the data from the cylindrical Patterson and then the 3-dimensional Patterson analysis supported a double helix in the A form such a conclusion was not reached by Franklin who before leaving for Birkbeck College had begun to investigate the B form of DNA (with which, as shown in her notebooks, she would come close to solving the structure with).

The solution to the structure:

On the 7th March 1953, James Watson and Francis Crick finished the model of the double helix. The Cambridge pair started model building again after Watson was inspired on account of being shown 'Photo 51' by Wilkins when he visited King's on the 30th January. Watson deduced that a double helix rather than a triple helix fitted with genetic transference and was supported by the biochemical work of Erwin Chargaff who had discovered that the quantities of the base pairs were equal. On the 12th March 1953 the King's team were invited up to view the model. Wilkins wrote of seeing the model:

"...a feeling came through to me that the model, though only bits of wire on a lab bench, had a special life of its own. It seemed like an incredible new-born baby that spoke for itself, saying 'I don't care what you think - I know I am right' " 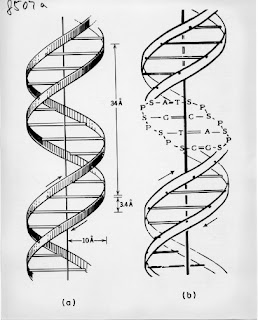 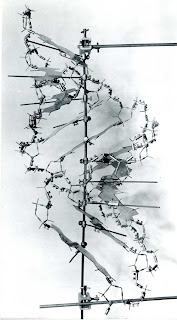 The diagram above on the left hand side shows some of the essential features of the double helix from the original paper by Watson and Crick such as the two sugar-phosphate chains running in opposite directions linked together by hydrogen bonded base-pairs stacked on top of each other. The diagram on the right shows a wire-model of the double helix used by Watson and Crick in their representation of the original double helical model of DNA.


The contribution of the the Biophysics department at King's to the discovery of the structure of DNA was vital. The x-ray diffraction studies and other experimental methods provided the essential properties for Watson and Crick to elucidate the structure.Yet these achievements were not in isolation and needed to be combined with the knowledge acquired from Pauling and Chargaff along with many others to lead to the structure of DNA. The cracking of the structure should not be seen in terms of a race but the culmination of advances in chemistry, biology and physics spanning back to the nineteenth century when Fritz Miescher extracted DNA for the first time.