In previous posts, I have concentrated on Wilkins' scientific career and in particular to his work on DNA and the double helix. However, in this post I would like to explore the "social responsibility" aspect of the project. This phrase has become associated with Maurice Wilkins due to his links to the British Society for Social Responsibility in Science (BSSRS) and the "Social Impact of the Biosciences" course at King's College London. Yet they also nicely summarise Wilkins' own attitude to the role of science in society and the need for a broader understanding of science and awareness of its implications. The following post will explore this general theme.
Cambridge and the Second World War

While Maurice Wilkins was an undergraduate at St John's College, Cambridge, he became a member of the Cambridge Scientists' Anti-War Group. The group, led by the eminent x-ray crystallographer John Desmond Bernal, researched the protection of British civilians in the likely event of aerial bombardment in any forthcoming war. They examined the possibility of poison gas attacks and incendiary bomb damage. Wilkins investigated whether a single incendiary bomb could set fire to the top of a building, burn through, and destroy an entire building, burning through many floors (as seen in the photograph on the right). He ignited an incendiary bomb on a platform of conventional floorboards. Whilst the bomb easily ignited and caused much violent flashing and burning, it only caused only caused minimal damage since the fire burned up and not down. The results disappointed the group, who believed the experiments could have been a powerful propaganda tool exposing the evil of German air attacks in Republican Spain and the resultant devastation of the town of Guernica. Yet the results of the experiments played out in real life: as Wilkins saw the same effect during heavy bombing in Birmingham several years later:

"In the street where I live the roof of the doctor's house was burning, and the hoses drenching the outside of the roof did not seem effective. I went inside and saw the ceiling under the burning roof was intact, and I broke a hole in it to put a jet of water directly into the roof space. But when I had finished making the hole I could see through it that the fire had already been put out. I felt embarrassed that I had damaged the doctor's ceiling..."

It was his move to study luminescence at Birmingham University in the Physics department under Mark Oliphant that would lead Wilkins to work on the development of radar and later the atomic bomb at Berkeley, California. His attitude to the bomb at the time was broadly supportive since its development was seen as crucial against continued Nazi aggression. Yet after the bomb's use in Hiroshima and Nagasaki he experienced growing unease about the consequences of such a weapon of mass destruction and realised that he wanted no further part in it. It was after the war whilst working at St Andrews University that, unbeknownst to him, he would catch the attention of MI5 due his subversive attitude towards the atom bomb. Wilkins was a keen supporter of sharing nuclear secrets for the improvement of international relations with the USSR. These views reported to MI5 and eventually led to his official monitoring (see previous post for details:  http://dnaandsocialresponsibility.blogspot.com/2010/08/maurice-wilkins-accused-of-spying-by.html ).

During the fifties and early sixties, he concentrated on his research on the structure of DNA but did not abandon his interest in the broader responsibilities of the scientist. During his Lasker Award speech in 1960, he emphasised that the importance of the double helix should be considered not only in terms of scientific knowledge but also in relation to the human benefit that may be created by applications of that knowledge. The winding down of the DNA work at King's and the award of the Nobel Prize gave him the freedom to return to the problems that captivated him as an undergraduate at Cambridge: science and its relation to society. In 1968, Wilkins became a prominent member of the public campaign to get the government biological research laboratory at Porton Down declassified and was one of the eight Nobel Prize winning scientists who wrote to the Prime Minster , Harold Wilson demanding that the work should be made public. It was through this network of scientists and other academics that Wilkins got involved in the group that became known as the British Society for Social Responsibility in Science (BSSRS) and was its President from 1969 to 1991. The society's importance and standing in the debate on science and values shown by the list of initial members as shown on the left.

The aims of the Society were to stimulate an awareness of the social significance of science and the corresponding social responsibilities both individually and collectively, and to draw public attention to the implications and consequence of scientific development. BSSRS held its inaugural meeting in April 1969, attended by three hundred delegates and soon had a national body of a thousand members. The Society became a vocal advocate against the use of chemical and biological weapons in particular the use of CS gas. BSSRS led its own research into the gas' toxicity and organised its own team of doctors and social scientists to visit Londonderry, where the British Army had used the gas extensively. The Society gave evidence of the potential hazards to the government enquiry, the Himsworth Committee on the toxicity of CS Gas in 1969. BSSRS also launched pioneering projects on the effects of pollution such as the hazards associated with dumping toxic waste off the Cumberland Coast by the Atomic Energy Authority.

The largest event that BSSRS organised was an international conference on the "Social Impact of Modern Biology" held in London on November 1970. Over three days an average of seven hundred people per day gathered at the meeting that included talks from Maurice Wilkins, James Watson, Jacques Monod, Jacob Bronowski, David Bohm and Stephen and Hilary Rose. The conference acted as a forum to discuss the implications of scientific research with fellow scientists and the public and included such controversial subjects as "test tube babies" and questioning scientific objectivity. As the following letter from Maurice Wilkins to one of the participants, Professor Richard Doll makes clear the conference was largely a success. Many young scientists said that "it made them think" and it led to a successful book of the discussions of the conference, that has recently been republished ("The Social Impact of Modern Biology" edited by Watson Fuller). What typified the meeting was the discussion and the occasional clash (hence the mentioned abuse) between the "New Left" young radical scientists and the older more established scientists. 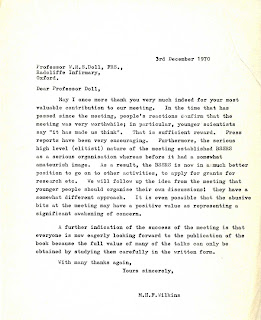 BSSRS never again achieved the same level of global coverage, but continued to have a presence especially through the work of local groups and its publication, Science for People.  The 1970 conference also led to the development of the "Social Impact of the Biosciences" course at King's College London that still runs to this day. Maurice Wilkins summed up its overall impact in his autobiography, "The Third Man of the Double Helix" (2003):

[BSSRS] helped scientists to see there was no sharp distinction between pure and applied science, and that it paved the way for a broader, interdisciplinary approach to the problems of science and society".