Not another conference: A letter from Sir Nevill Mott on the proliferation of anti-nuclear disarmament splinter groups

While trawling through the papers relating to political activism it is difficult it is difficult to keep track of the myriad political groups and bodies that crop up - for instance, the many different groups campaigning against nuclear disarmament in the 1970s and 1980s: While groups like CND and Pugwash are fairly well known, there are much smaller less familiar groups, such as Scientists against Nuclear Arms (SANA), Medical Campaign Against Nuclear Weapons (MCANW),   World Disarmament Campaign, Teachers for Peace, Nuclear Warfare Tribunal -  and this doesn't include campaigns run by broader spectrum organisations such as Food and Disarmament International (FDI) and World Federation of Scientific Workers (WFSW). In a word: confusing.

However, it seems I was not alone in finding it difficult to navigate the various groups, as this letter to Wilkins from physicist Sir Nevill Mott attests. 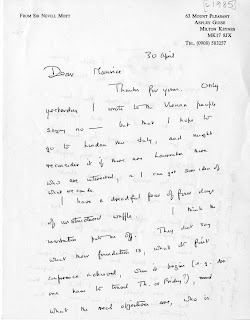 Sir Nevill was dubious about attending a conference on nuclear disarmament for fear of “unstructured waffle”. He explains: “I think the invitation put me off. They don’t say what their foundation is, what its first conference achieved, when it begins, what the real objectives are, who’s funding it.”  Mott’s opinions were seemingly coloured by a recent experience at a local group meeting organised by a Vicar in a nearby parish where he was surprised by the attendance of hard-line CND. He states: “I was very repelled- they would not think about practical ways of stopping the arms race, no first use, oppose star wars- but just paraded their consciences for 2 weary hours”. 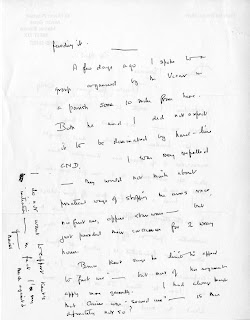 This is not to cast aspersions on the importance of these causes, or on to scientists like Maurice Wilkins, who was actively involved in many. As I have previously posted, the campaign to investigate the work done within the Microbiological Research Establishment at Porton Down led by the “Conference on Chemical and Biological Warfare” or the awareness campaign on the poison gas attack on the Kurds by Iraq by the International Scientists’ Congress were admirable feats. There are many more examples that will be included in the digitised papers of Maurice Wilkins and hopefully not many examples of “unstructured waffle”!