'Ways out of the Arms Race": The Second International Scientists' Congress

During the 1980's, Maurice Wilkins spent a significant amount of time promoting and campaigning on disarmament and development issues. While maintaining his long running membership of British Pugwash, Campaign for Nuclear Disarmament (CND), British Society for Social Responsibility in Science (BSSRS) and the World Federation of Scientific Worker's (WFSW), he also became honorary President of the Food and Disarmament International (FDI) organisation and an active member of scientists' against nuclear arms (SANA). It was the later that led to his involvement in the 'Ways out of the Arms Race' Second International Scientists' Congress held at Imperial College London, on the 2-4 December 1988. The conference aim was for imminent scientists from across the globe to discuss papers on nuclear, chemical and biological disarmament. It succeeded in doing so with the added benefit of providing political pressure by mobilising its attendance to protest on two concurrent political events: the abduction and imprisonment of the Israeli nuclear plant technician, Dr Mordechai Vanunu and the poison gas attacks by the Iraqi Army in Halabja in 1988. Evidence of the petitions and demonstrations are recorded in the papers of Maurice Wilkins which includes candid replies to him from representatives of the Israeli and Iraqi governments.

Dr Mordechai Vanunu, was a former nuclear technician at the Negev Nuclear Research Center from 1976-1985. In 1986, whilst in Sydney, Australia, he met a Sunday Times journalist and revealed knowledge of the Israeli nuclear weapons programme before accompanying the journalist to London. It was during his time in London that the Israeli Government decided to capture Vanunu and hatched a plan to remove him from UK territory by getting an undercover Mosad agent to pretend to be an American tourist, named Cindy who Vanunu agreed to accompany to Rome. In Rome he was drugged and freighted back to Israeli where he was imprisoned for treason and confined for 18 years, including eleven years of solitary confinement.

During the Congress, a demonstration was organised to the Israeli Embassy in London where a petition would be handed in asking for clemency for Mr Vananu. A significant number of the delegates signed the petition including fellow Nobel Prize winners, Dorothy Hodgkin and Joseph Rotblat. 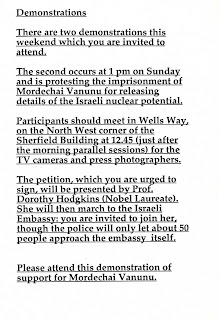 The following summer, Wilkins received a reply from the Israeli Government's Ministry of Justice: 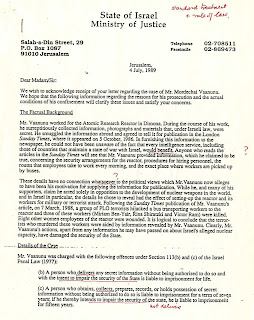 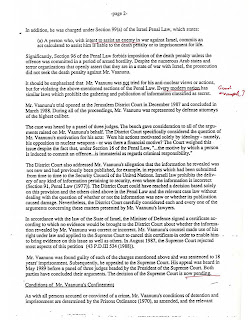 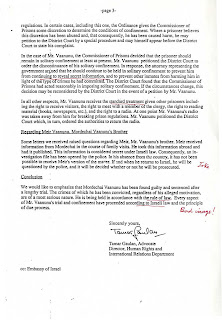 The Halabja massacre is now well known event due in part to the build up to the Second Iraq war and the fall of Sadam Hussain's regime. However, at the time of their occurence the international response was ambiguous with some international media coverage and western governmental officials siding with the official Iraqi line that no poison gas attacks were used against the Kurdish people. Wilkins sent a letter to the Iraqi ambassador in London and recieved a detailed reply with a number of attachments. The letter provides evidence of the divided media coverage and general lack of facts available allowing for passionate denial of any use of chemical weapons and a dismissal of the claims as part of an anti-Iraqi conspiracy. 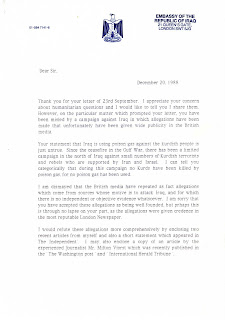 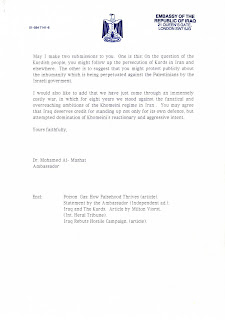