Campaign to declassify Porton Down laboratory


In 1968, an intense public opposition to chemical and biological weapons existed in the United Kingdom. This state of affairs was created by public anger and opposition to their use by the American government in the Vietnam conflict. Members of the public and environmental and disarmament groups became increasingly suspicious of the microbiological research establishment (MRE) at Porton Down, which was suspected of producing nerve gas. A campaign began to declassify the MRE at Porton Down.

The campaign starting point was on 18 July 1968 with Labour M.P. Tam Dalyell's parliamentary question: should the Porton laboratory be transferred from the Ministry of Defence to the Ministry of Health and its work be made declassified? Maurice Wilkins and fellow Nobel Prize winners Cecil F Powell and Fred Sanger wrote to Prime Minister Harold Wilson in support and followed it up by orchestrating a press-campaign involving fellow Nobel Prize winners and Royal Society Fellows. 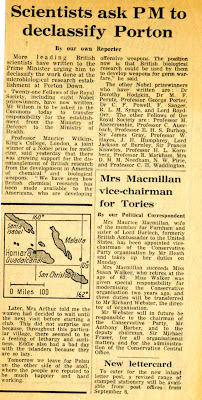 Wilkins systematically wrote to his fellow scientists about the issue urging them to write to Wilson. He received replies from the likes of Dorothy Hodgkin, Max Perutz, Richard Synge, Conrad Waddington and Sir Lawrence Bragg.

Some of those who responded declined to support the campaign, like his former biophysics department colleague, Dame Honor Fell. She, like many of those who declined, although sympathetic argued that the chemical and biological warfare research done by the microbiological research establishment had acted as a deterrent in the Second World War against potential German nerve gas attacks. 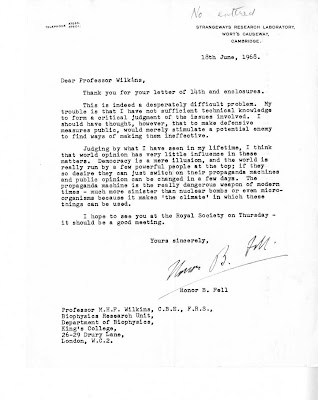 However, the majority of scientists who were asked agreed to support the campaign and twenty-one fellows of the Royal Society, including eight Nobel Prize winners endorsed the campaign. The result of the press campaign and mounting student and public anger was an official open day of the facility announced by Wilson scheduled for the 23-25 October 1968. Maurice Wilkins was one of a number of scientists who were invited to attend and his archive retains a copy of the official brochure produced for the visit. 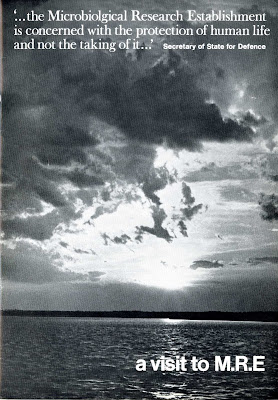 Wilkins later recalled that “many scientists came on the Open Day and a more open-minded attitude to the work there seemed to be created. But we came away well aware that with weapons such as these it was difficult to tell what research was for offensive use, and what was defensive, aimed at protecting people from them”.